Cases against NJ Weedman up in smoke. Prosecutors cite changing views of marijuana 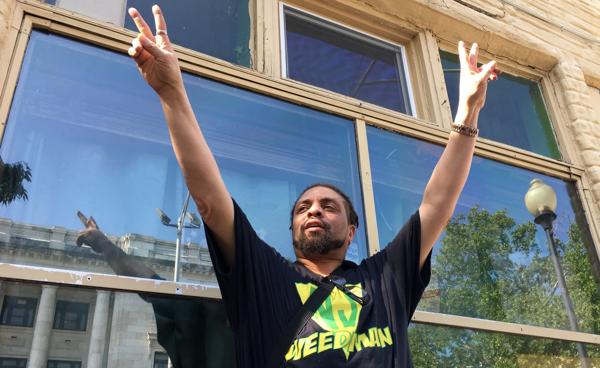 Above:  Ed “NJ Weedman” Forchion reacts to someone who beeped their horn in support as he talked in front of his shuttered restaurant Friday, May 25, 2018 in Trenton, a day after he was acquitted of witness tampering and was released from jail. (Kevin Shea | For NJ.com)

By Paige Gross   pgross@njadvancemedia.com,   For NJ.com

The Mercer County Prosecutor’s Office announced Wednesday it will be dropping most of the remaining drug and related charges against Edward “NJ Weedman” stemming from a 2016 raid on his Trenton restaurant.

What is not dismissed will be downgraded to municipal court, where jail time is unlikely.

But Forchion’s not seeing this as all good news.

Late last month, Forchion was found not guilty by a jury on third-degree witness tampering charges – a case that also grew from the drug raid.

The marijuana activist spent about 15 months detained in the Mercer County jail during two trials, and was set free hours after he was acquitted.

The prosecutor’s office said the decision to not move forward in prosecuting Forchion came after considering the shift in climate of marijuana legislation in New Jersey.

“They’re about 10 years too late,” Forchion said of a change in public opinion of marijuana.

The office also considered the changes in law regarding the state’s bail reform – an issue Forchion railed against during his time in jail.

“I’m half-way happy and half-way mad,” he said Wednesday night. “Now the state just drops the charges, and I’ve already spent 16 months in jail. I had 42 charges against me total. It was a campaign of terror by the police department.”

NJ Weedman spent 400-plus days in jail. Turns out he was not guilty

Can he get anything for all the time he spent locked up?

“These factors call for an adjustment in the way the office most appropriately uses its resources and assistance from other law enforcement agencies in order to prioritize detention cases such as murders, attempted murders and violent crime,” the prosecutor’s statement said.

“The fact that the defendant has served more than a year in prison while these cases were pending was also taken into consideration,” it continued.

In all, Forchion had been indicted in 2016 and 2017 and was facing 11 charges related to narcotics dealings and cyber harassment. The prosecutor’s office has dismissed most of the charges, and downgraded five to “disorderly persons offenses,” all of which will be tried in Trenton Municipal Court.

The state is currently wrestling with ideas of how to deal with the hundreds of thousands of people who have been charged with marijuana crimes. Some legislators are considering expunging low-level convictions, but aren’t yet sure of the logistics.

“After a review of the defendant’s pending cases,” the prosecutor’s office said in its statement, “We feel the downgrade and dismissal of the charges is an appropriate resolution.”